What, I’m not good enough to be blacklisted??

Those were the words with which I jokingly feigned righteous indignation last month when the Israeli rabbinate released its “blacklist” of rabbis from whom they will refuse letters of Jewishness for new immigrants. Others of my colleagues had similar amused responses: congratulating those who did make the list, creating multi-step plans for getting onto the next one.

But the truth is, that list ought to horrify us. Especially today. 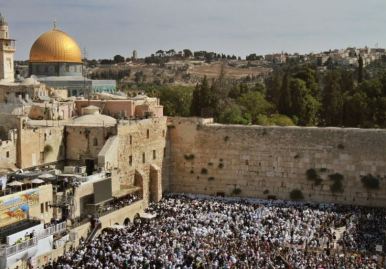 Tonight begins Tisha B’Av, the 9th day of the Hebrew month of Av. On this day, we mark the traditional anniversary of the  destruction of the ancient Temple by Rome in the year 70. This is a seminal event in Jewish history: the beginning of a 2000-year exile; the loss of sovereignty that left us wandering around the world and vulnerable to antisemitism and persecution for centuries.

Like any event, the fall of Jerusalem resulted from a number of geopolitical factors, among them increasing animosity between the Jewish population and the Roman power structure, and General Vespasian’s need to prove himself in his bid to become Emperor. But interestingly enough, the Rabbis of the Talmud – the leaders of the Jewish community in the centuries immediately following those tragic events – did not put the blame on those factors. Rather, they placed it squarely on us: on the fact that we Jews couldn’t get along with one anther.

A story in the Talmud tells that the Temple was destroyed as a result of a grudge-holding socialite and a vindictive curmudgeon named Bar Kamza, who hated each other so much that one of them informed on the other to the Romans and brought the wrath of the empire on Jerusalem. Did that story actually happen? Probably not. But what did really happen is that the Jews of the 1st century were deeply divided into political and religious factions that despised one another. That they fought amongst themselves. That the Jewish factions burned one another's stores of food in the besieged city, making its residents vulnerable to Rome and hastening the destruction.

In other words, Rome didn't do it. WE did it. We destroyed ourselves by trying to delegitimize one another. The Rabbis call this Sinat Chinam – "Causeless Hatred" – and they credit it with bringing down the ancient Jewish state:

Why was the Second Temple destroyed, seeing that in its time [Jews] were occupying themselves with Torah, mitzvot, and righteous giving? Because of causeless hatred. This teaches that causeless hatred is considered to be as grave as the sins of idolatry, sexual immorality, and bloodshed combined. (Talmud, Yoma 9b)

It is a stinging indictment of ancient Jews for infighting and mutual delegitimization. Too bad we are doing it all over again.

The last month has seen, among other events, the Israeli government’s decision to renege on its agreement to create an equal egalitarian section at the Western Wall, the release of the now famous rabbinical blacklist, and escalating attacks on women praying aloud at the Kotel.

Sadly, these events are no longer surprising. They are part of a pattern of behaviour on the part of both the ultra-Orthodox community (as encouraged by its leadership) and a government (in particular the sitting Prime Minister) that relies on Haredi support to stay in power. But we must not let the fact that such actions have ceased to surprise us mean that they no longer horrify us. Make no mistake: those Jews who shove women at prayer, who campaign against the recognition of liberal rabbis, who actively work to delegitimize Jews who are not like them, are following in the footsteps of the ancient Zealots who burned the stores of wheat. They are loosening the bonds between Jews around the world; sowing the seeds of causeless hatred amongst our people. They are, slowly but surely, bringing down the Jewish state.

It has been argued that since the vast majority of liberal Jews live in the Diaspora, they are (as non-Israelis) not entitled to a say in Israeli internal affairs. And yet there are many thousands of liberal Jews living in the state – both those who affiliate with the Reform and Conservative movements (a small but growing number), and the many more whose values align with those movements. Does any Democratic country have the right to discount the needs and rights of a minority population based on its smaller numbers? And even if this were not the case, the fact is that Israel is the only Jewish state, and has been entrusted with the care and administration of Jewish holy sites on behalf of the Jewish people. That gives it a responsibility to cast the net widely when it comes to defining legitimate Jewish practice and identity.

I love Israel with all my heart. I believe the goodness of having a Jewish state for the last 69 years is unparalleled in the history of our people. And I believe that we are capable of better than Sinat Chinam. Let us learn from the past, and work together to build a Jewish state that is a home for all Jews. One that is a political embodiment of K’lal Yisrael – the entire Jewish people.

7 thoughts on “Causeless Hatred and the Jewish State: Have We Learned Our Lesson?”